The sold-out 2018 Calibash had many surprises last night at the Staples Center in Los Angeles, CA. Becky G opened the concert with her latest hits “Sola” and performed her latest single “Mayores” with Bad Bunny. Bad Bunny performed his latest songs such as “Soy Peor,” “Krispy Kush” and his latest single with Wisin. Wisin y Yandel got fans dancing both singing as solo artists as well as performing their singles as a duo. The newest Latin artist, Ozuna performed his latest songs “Criminal” with Natti Natasha and surprised fans by performing his newest single “La Modelo” and bringing out Cardi B to perform their duo song.

Headlining the Calibash concert, was the Latin queen Jennifer Lopez performing her old hits “Jenny From The Block,” “On The Floor” and performing her latest hits “Amor, Amor, Amor”  with Wisin and “Ni Tu Ni Yo” by bringing out Gente de Zona on stage to perform with her. She also gave fans a snippet of her upcoming singles “Quiero Dinero” featuring Cardi B and DJ Khaled and “Us” featuring Skrillex. Jennifer Lopez did not hold back showing fans her dance moves by dancing to songs that are hot on the music charts.

J Balvin ends the concert performing his newest single “Machika,” that is now currently No.1 in the charts globally and it was recently released on Friday (January 19th) He also performed many of his latest hits such as “Mi Gente” and the Latin remix “Unforgettable” with French Montana. An unforgettable performance from all the artist and it not stopping just yet. Keep up with the latest posts and engagement on Instagram via the following hashtag #CalibashLA2018

If you missed the LA event yesterday – Calibash is heading to Las Vegas, NV on Saturday, January 27th – for more info CalibashLasVegas.com

Enjoy these music videos to give you a taste of Calibash! 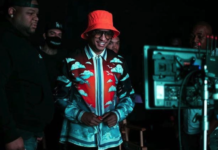 See Why We Feel Mon Laferte Is Soooo “Biutiful”