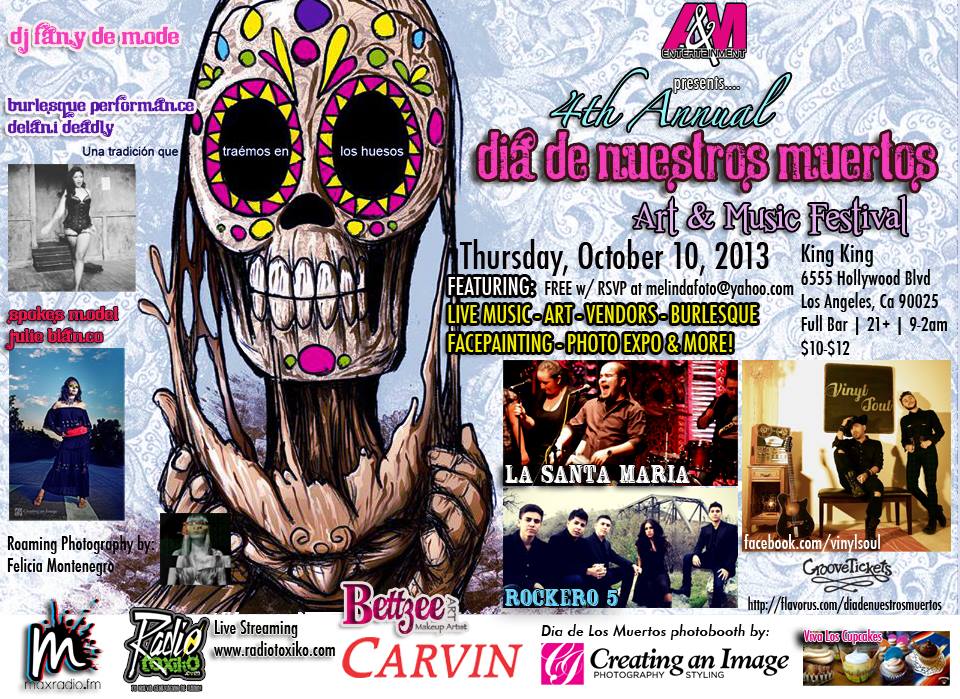 With all the Halloween and Dia De Los Muertos parties and celebrations, one to look forward to is A & M Entertainment’s “4th annual Dia De Nuestros Muertos Art and Music Festival” at the King King in Hollywood on Thursday October 10, 2013.
A & M Entertainment has always strived to give local bands and artists the opportunity to showcase their talents in well organized events and this time it won’t be the exception. After the success of the “Women That Rock” event last month at the King King Club, there is no question that this venue will soon become a favorite of Latin rock fans in L.A.
For the “Dia De Nuestros Muertos Art and Music Festival” the musical talent will be provided by Latin Soul duo Vynil Soul and their mix of R&B, soul, boleros, hip-hop and dance music.

Rockero5 , a rock band made up by 5 siblings ages 15-20, who have performed on NBC, Telemundo, Azteca TV, and KTNQ Radio will bring their youthful energy to the King King stage.
And closing out the musical part of the event will be addicting high energy cumbia sounds of La Santa Maria. La Santa Maria have been described as “forged with ‘Sabor’ and passion that only the City of Los Angeles can breed. La Santa Maria brings a fresh-one of a kind sound blending highly energetic rhythms and melodious vibrations to every venue they play”.
As with most events put on by A & M Entertainment, the ”Dia De Nuestros Muertos Art and Music Festival” will also include face painting, photo and art expositions and a burlesque show.