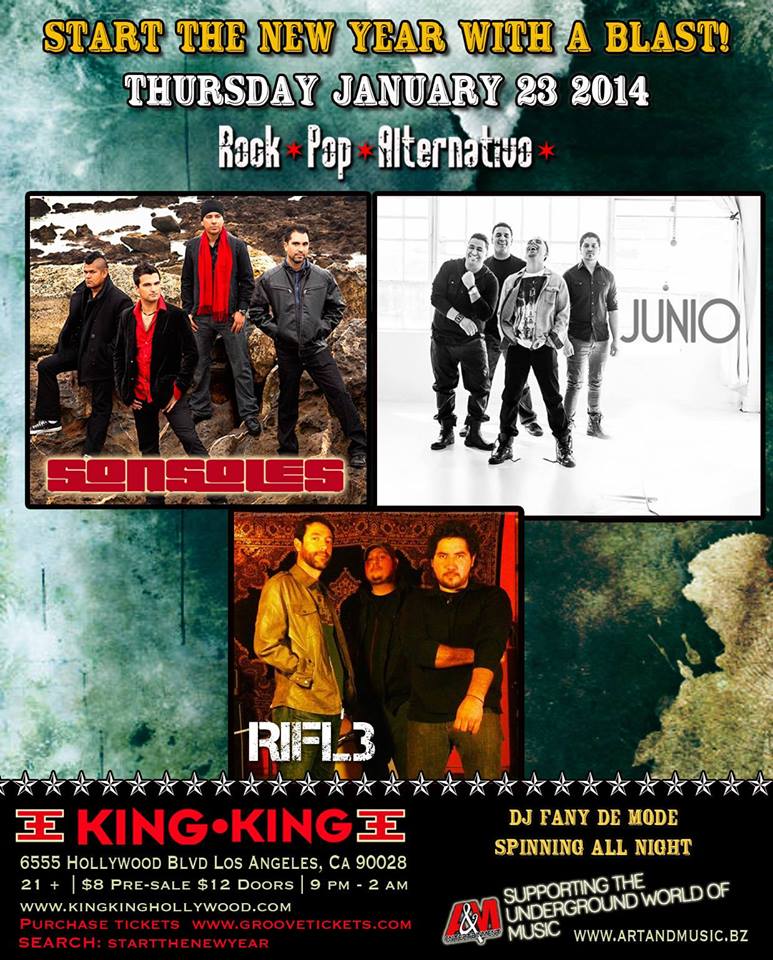 Continuing with our local spotlight (Enfoque Local), as part of their monthly concert series at the King King in Hollywood, this Thursday night, A&M Entertainment will once again be presenting some of the best local talent, and this time around it will be one of the hottest L.A. bands, Sonsoles who will be joined by Junio and Rifl3.

Sonsoles have just finished their Go Fund Me campaign to raise funds to complete their first full length album, an album for which they have already been busy writing and recording demos.
Sonsoles have been dropping some hints of what the new material will sound like and judging from those snippets of the songs they have shared, we can expect a full on rock attack with blistering guitars chords and leads as was the case on their latest EP, “Mientras Te Vas”, in which it shows a band that has found the sound they were looking for and are now developing and evolving on that sound and the band sounds tighter and more confident than ever.

Joining Sonsoles will be Junio, an up and coming band who are starting to make a name for themselves with energetic performances and their music, which is based on guitar rock but also with catchy pop hooks that makes them endearing to a broader musical audience.

Completing the line up for Thursday night will be Rifl3, a band composed by L.A. music veterans, Larrhy Ruiz formerly of Curanderos and other musical projects, Gabo Ramírez from María Fatal and Concrete Blonde and Pepe Alonso also from Maria Fatal.

According to their artist bio on their Reverbnation page, Rifl3 describe their music as: “[a] sound [that] ranges from heavy-speedy tunes ala STP, to melodic compositions that resemble Soda Stereo passages creating a well balanced music production that captures young rebel ears as well as those musically mature ones used to listening to good solid rock and roll.”

The monthly concert series put on by A&M Entertainment has become one of those events to look forward to every month, and with each show, the crowds have been getting bigger, so come out and support the local talent.