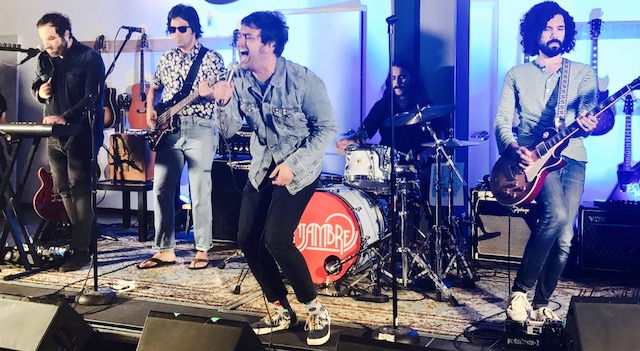 Promoting their 6th record “Imperfecto Extrano”, the rock and alternative band Enjambre come back to the states to promote their latest album. Enjambre is composed by brothers Luis Humberto, Rafael, and Julian Navejas as well as Javier Mejia on guitar and Angel Sanchez on drums. The band is originally from Southern California in the city of Anaheim but eventually decided to expand their unique music to Mexico. In Mexico, the band decided to stay and build their career internationally. Recently, they decided to come back to the states due to their fan base is growing. Musica Roots had the opportunity to talk to the Luis Humberto who is the lead singer of Enjambre.

Musica Roots: Were you born and raised here in California?

Musica Roots: Where did you go to college?

” I went to a few but I went to Orange Coast College.”

Musica Roots: What were you studying in college?

” I was in film school. I ended up getting a certificate in early childhood education. I was a preschool teacher for like 7 to 8 years when I was living in Orange County when the band was starting.”

Musica Roots: So going back to the album, did you guys write this whole album or get any help from any producers?

“We do our music ourselves. We always have and that’s kind of the point of it. We’ve had producers working on it. On this one, there’s this producer called Phil Vinall, who has worked with bands like Radiohead, Placebo, and others. In Mexico, he’s worked mainly with Soen and he is a really good friend of ours. We really like his knowledge and style. We have good chemisty, this is the second record we produced with him.”

Musica Roots: What inspired this album and the name of the title?

“This record is, I think it’s like a good ambassador on what’s going on our era and in our environment. I’m not talking about bringing peace or anything like that. I’m talking about more about where we are growing and you know the day to day life. You know the day to day life changes day to day so whatever affects us around that time is implicated in these lyrics and you know musically accompanied. For this particular record, the synthesizers became protaganistic. We got a bunch of old synthesizers from the 70s which is something that we have always liked and we kind of have in other records but they’re not easy to come around and it’s hard maintenance and you know we would use them in the studio through a computer. But now we are able to have the real deal and during rehearsal all these sounds, they just kept coming out and we were like we should use that more and it ended up sounding very like twilight zone-ish. The title of the record is called Imperfecto Extrano which means imperfect stranger. There’s that saying that guy is a perfect stranger and I don’t really know that person. But by saying imperfect, that implies that there is a pre-judgement or judgment about this person who is not a perfect person. Humanity is a big subject, we are imperfect and strangers and it doesn’t matter how much you think you know yourself you’re still a stranger. Extrano means weird in spanish, so you’re always a stranger and a weirdo and you’re always imperfect and that’s okay that’s cool. It’s a recurring subject amongst a few of the songs on this record. ”

Musica Roots: You have some concerts coming up. Which one are you most excited for?

“Auditorio Nacional en la Ciudad de Mexico, this is one of the most important places to play. It’s an auditorium that fits 10,000 people. We’ve done it before. Like two records ago we did a presentation there about that record and now it’s going to be about Imperfecto Extrano. It’s on October 8th and it’s going to be a magnificent show and we are looking forward to that.  We are excited about coming back to the US. We’ve met with some people and it seems like we are going to be coming back more often. This is something that I’m really looking forward to because not only do we love it here but there is a bunch of Mexicans and that’s what we are. So they can go and be part of this scene in their own country or other hispanics. So it’s nice to come and bring it over and it’s nice that there are more festivals and more shows of contemporary Spanish rock happening. So that’s going to be cool and I’m really looking forward to that too. Hopefully, we have more shows and soon enough here in the states.”

Musica Roots: My last question is, even though it is a little early on, will there be another album?

Demi Lovato Debuts New Album “Tell Me You Love Me”