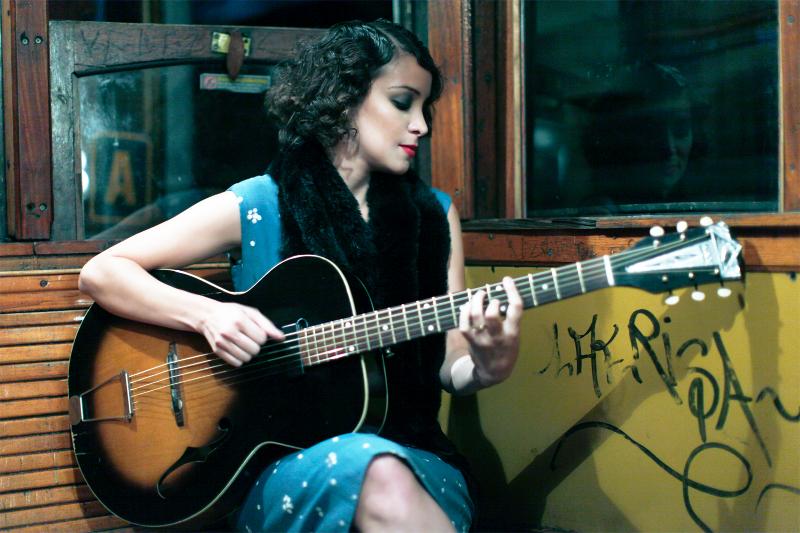 Gaby Moreno earned the respect and appreciation of fans and critics alike in Latin America, Europe and USA after the release of her widely acclaimed first all Spanish-language album ‘Postales’, which was released under the record label Metamorfosis.

Moreno’s original blend of jazz, soul, blues and 1960s rock led to multiple tours across the globe, including sold out dates in Canada, USA and Europe. Further, her endearing charm, elegant harmonies and stunning voice turned her into the first female artist signed by Metamorfosis, the independent music label created by Latin legend Ricardo Arjona.

‘Postales’ spun off numerous hits, including the notable tracks “Ave Que Emigra” (Migrating Bird) or “No Estoy Tan Mal” (Not Doing That Bad), which hit the airwaves in countless radio stations and captivated millions worldwide.

Moreno is not only noted for her solo work as she has also collaborated with an A-list of top acts. One such example is the hit song “Kiss of Fire”, recorded alongside British Singer and Actor Hugh Laurie (House, M.D.). She will also join the celebrated Italian tenor and singer-songwriter Andrea Bocelli in his upcoming concert in Guatemala City.

The Latin GRAMMY Awards® 2013 nominations were announced during a press conference at the stage of the legendary Avalon in Hollywood, California. The Awards Gala will take place next Thursday, November 21, 2013 at the Mandalay Bay Events Center in Las Vegas, Nevada. The much-awaited ceremony will air under Spanish speaking television network Univision all over the USA and Puerto Rico.

“Moreno’s breathtaking voice is passionate and stylistically malleable, as she glides back and forth easily between bossa nova and bluesy rock.”-NPR Tiny Desk

“Gaby Moreno’s soulful vocals and ability to switch languages and genres have made her a rising star.” -NPR All Things Considered

About Gaby Moreno
With her three albums, “Still the Unknown” (2008), “Illustrated Songs” (2011), and ‘Postales’ (2012) and the EP, “A Good Old Christmas” (2010), Gaby Moreno earned the possibility to tour tirelessly across the globe, including sold out dates in Canada, USA and Europe alongside such artists as Tracy Chapman, Ani DiFranco and Van Dyke, and performances in key fests such as Electric Burma in Dulbin-which honored Nobel Prize Winner Aung San Suu. There, Gaby shared the stage with acts like Bono and Grammy Award winners Angelique Kidjo and Lupe Fiasco. She has also appeared at Jay Leno’s legendary TV show, where she joined Kris Kristofferson, Eric Burdon, Johnny Lang and Shawn Mullins.
In 2006, Moreno won the Grand Prize at the John Lennon Songwriting Contest with her song “Escondidos,” first in the Latin category, then overall. This recognition earned her an invitation by Yoko Ono to unveil the John Lennon Educational Bus.

In 2010, she recorded “Smile”- the popular instrumental theme used in the soundtrack for the 1936 Charlie Chaplin movie “Modern Times”-for the Oscar Award winning documentary “The Cove”. She was also nominated to the EMMY Award in the category “Outstanding Main Title Theme Music” for the original theme of the TV series “Parks and Recreation”, which she co-wrote.

Moreno has also collaborated with superstar Ricardo Arjona, with whom she recorded the song “Fuiste Tu” from the CD “Independiente”. The video of the track reached over 100 million views on YouTube.