Dominican-American singer and composer, Jenn Morel, who usually gets our heart racing with each of her songs releases a new single titled, “Quema.”

The song which launched with Zumba is sultry, sexy, and filled with hard-hitting beats and rallying trumpets, checks all the boxes when it comes to a high-energy party-starter or a workout booster, which is why it will surely raise the levels of adrenaline among her fans.

“Quema” is Jenn’s first single after her internationally acclaimed launch which positioned her as one of the most important Afro-Latin artists of today.

Currently, Jenn Morel is working on her first music album which marks the first chapter in her new musical career. The Dominican is also working on the production of her second album with which she will surely make history. 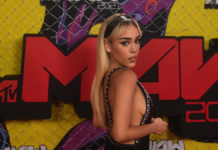 Sonsoles At The Latino Author Summit.