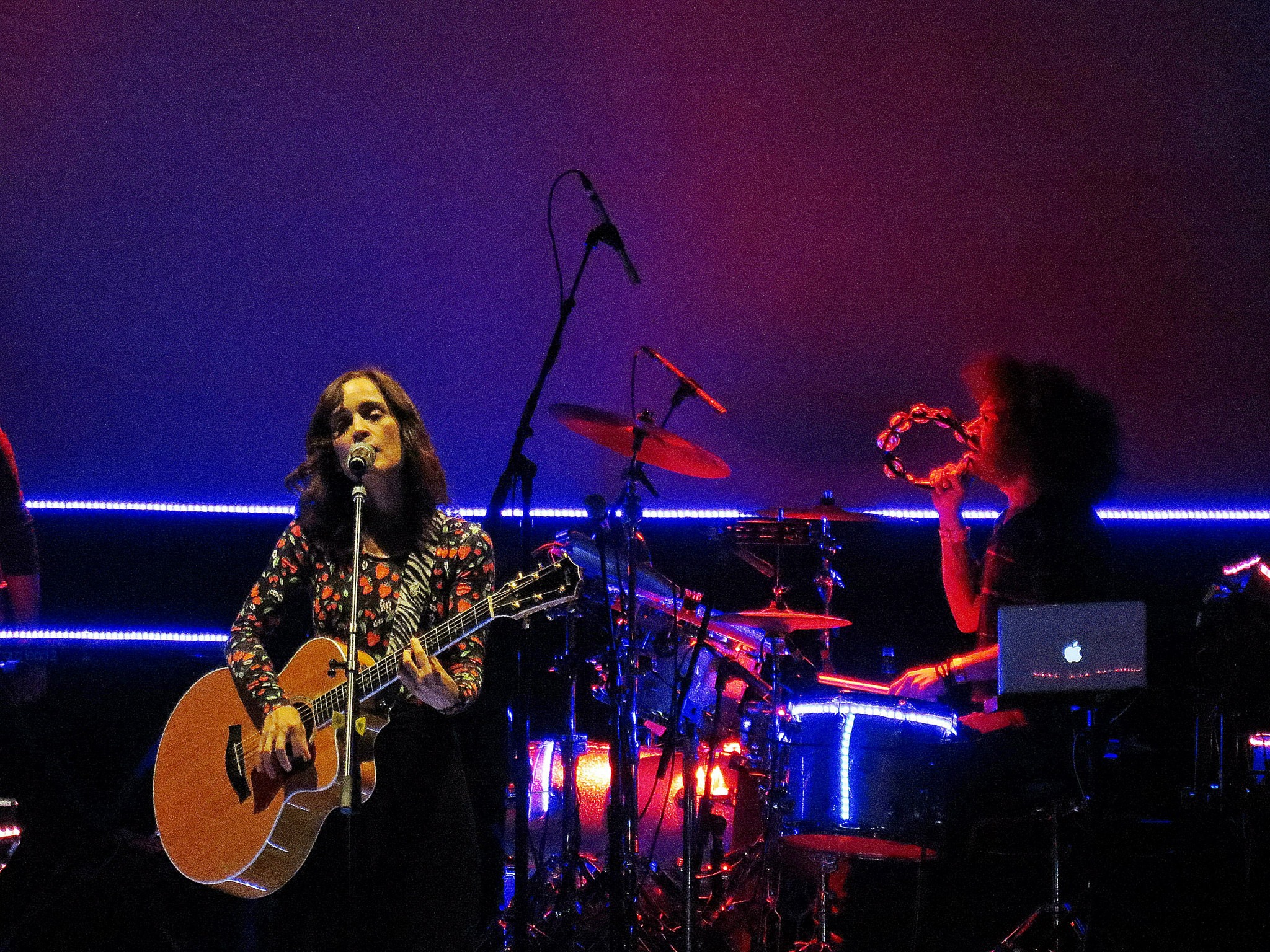 In front of a packed House of Blues in Anaheim, Julieta Venegas began the U.S. leg of her “Los Momentos Tour” with a riveting performance in which Julieta has gone back to her indie roots and away from some of the radio friendly commercial pop route she had taken on some of her recent songs prior to her new album “Los Momentos”.
With a giant projection screen at the back of the stage and two smaller screens on each side of the stage, and a low key but effective light show Julieta took the stage to a blue lighted stage and sat at her keyboards and began the show with “Hoy”, the opening song of the new album. 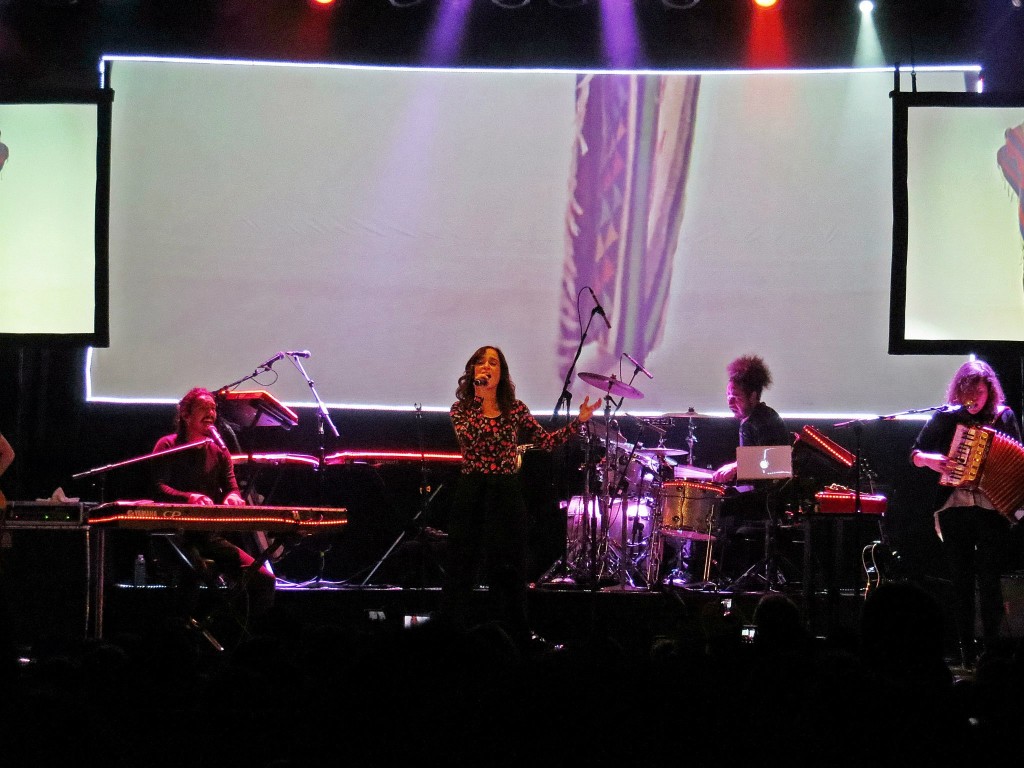 With a versatile band backing her up with the some of the members switching from keyboards to acoustic and electric guitars and accordion, Julieta herself showed her versatility as a musician as she easily moved from behind her keyboards to acoustic guitar as well as her accordion and with great charisma had the audience on the palm of her hand and often invited them to sing along with her and the energy from the audience and artist easily flowed back forth in great synergy.
In an always risky move for an artist, Julieta played more than half of the songs on her new album “Los Momentos”, besides “Hoy”, “Verte Otra Vez”, “Por Que?”, “Te Vi”, “Vuelve”, “Nada Importante”, “Los Momentos” and “Un Poco De Paz” were also part of the set list. 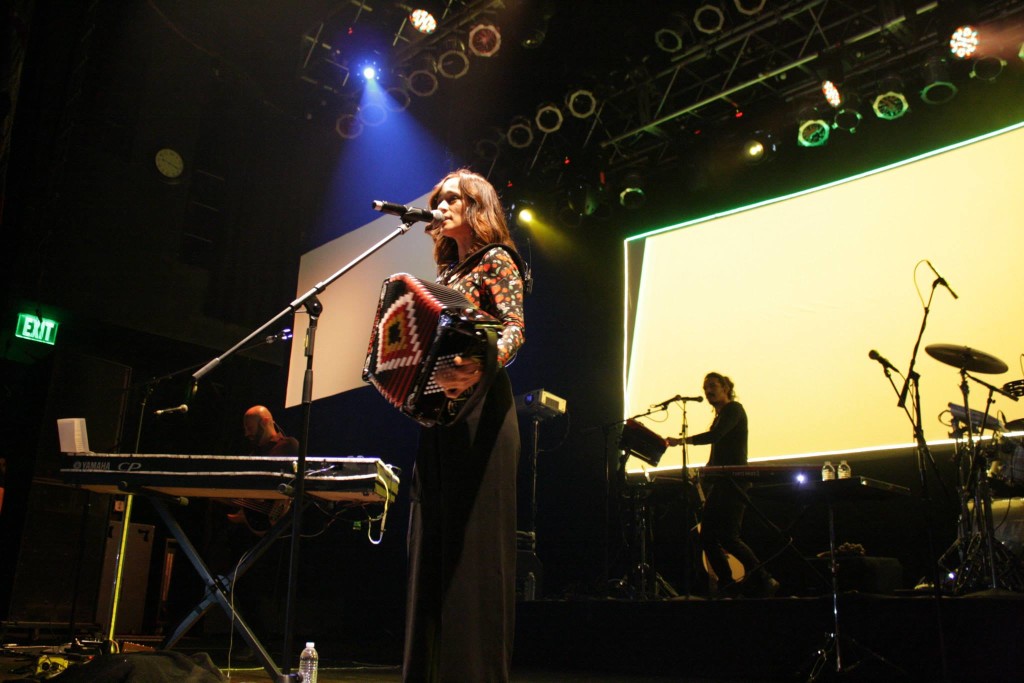 In a well balanced set list, Julieta played songs from each one of her 7 albums, even going back to her first album from 1996, “Aqui” for the closing song of the show with “Esta Vez” and 2000’s “Bueninvento” album for “Seria Feliz”.
Fans of her more popular songs would not be disappointed as Julieta played some of her greatest hits such as “Me Voy”, and “Eres Por Mi” from the album “Limon y Sal” as well as “Andar Conmigo” and “Lento” from the album “Si”.
If you missed Julieta Venegas this time around, you can catch her again at the House of Blues on the Sunset Strip in Hollywood on September 25th.