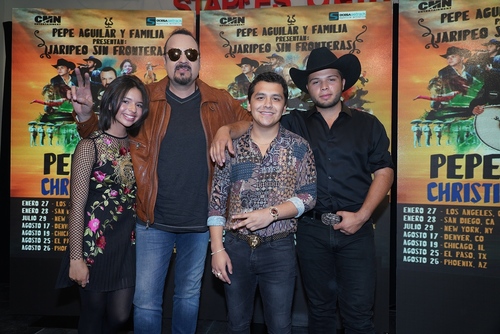 Ranchero and pop singer Pepe Aguilar, is set bring back the traditional Jaripeos alongside his son Leonardo and daughter Angela Aguilar and Millennial sensation Christian Nodal. This is followed by the announcement of Jaripeo Sin Fronteras tour. This has been a typical tradition that Aguilar’s father the late Antonio Aguilar had done with his family.

The reviving of the Jaripeo tradition by Aguilar and his sons, is very important for the singer because he wants the audience to have an innovative experience. Jaripeo sin fronteras, is going to be an equestrian extravaganza combined with a rodeo. Also, there would be charros and cowboys in fierce competition, American clowns risking their lives with bulls. And what a way to initiate this at the Staples Center on January 27, 2018 the kickoff of the tour.

On inviting Millennial singer Christian Nodal, he said that he’s one of the new music generations who at a young age sings with Mariachi and has achieve great success. Nodal, 19, has managed to win a large audience with his fusion of mariachi and norteño. His international hit “Adiós Amor” reached number 1 on Billboard’s “Regional Mexican Songs” airplay chart as did his other hit “Probablemente”, featuring David Bisbal.

See video of the press conference with Carlos Alvarez yesterday in Los Angeles:

We hope you enjoy these music videos as well:

Wisin & Yandel is awarded the TOP ICON Recognition at Premios...