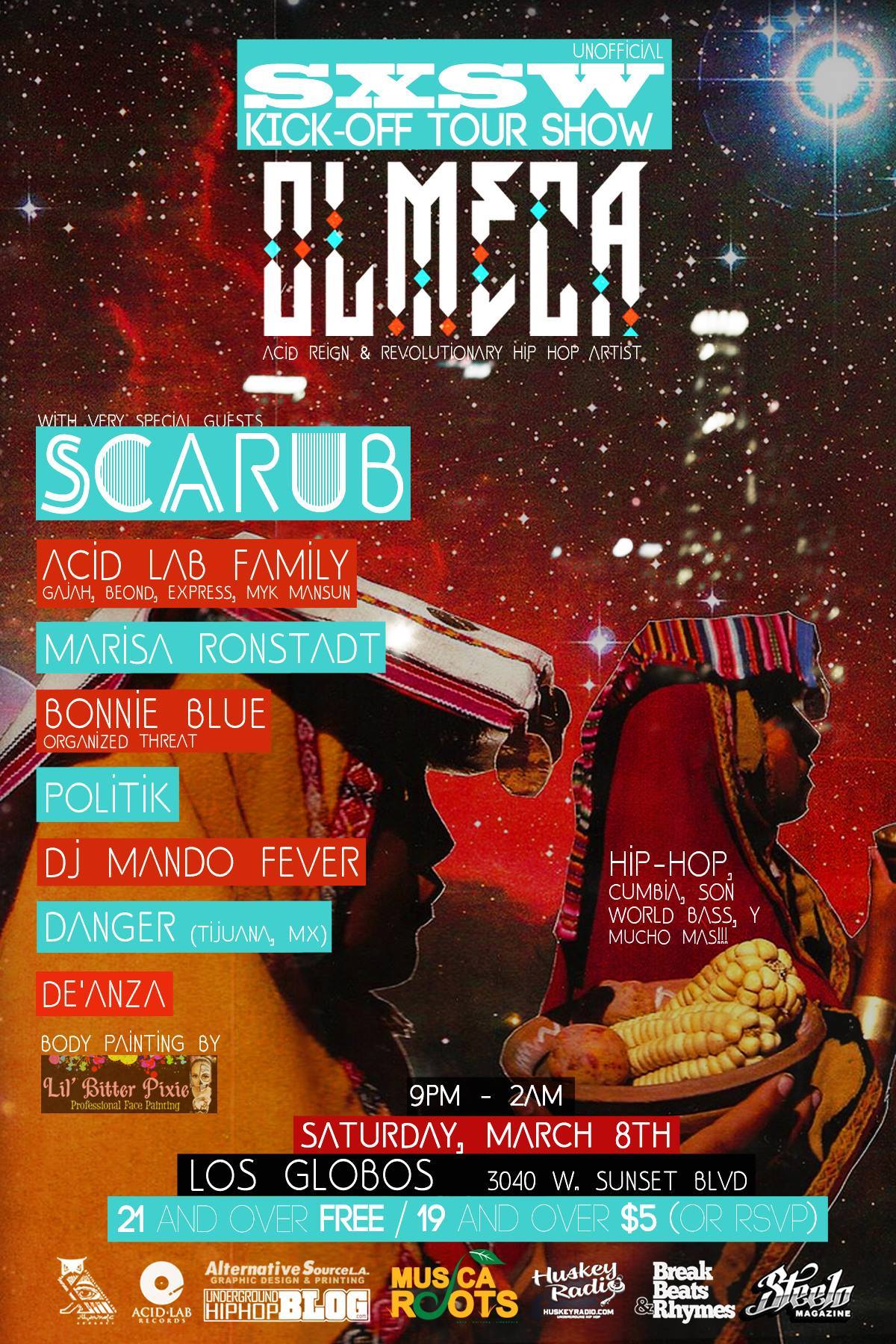 Like many poor and migrant families, Olmeca’s family moved from place to place in order to find means of survival. This made them part of the cheap urban labor market that gave Olmeca an insight to realities too often hidden from the mainstream narratives of US conditions. He grew up in the U.S. and in Ocotlan, Mexico. His father, a drummer for “Grupero” bands of the 70’s was a reality that brewed Olmeca’s blending of music genres. Olmeca’s family settled in Rosemead, CA, a gang training ground in Los Angeles County. Although, a talented athlete and student, he gave up scholarships and corporate jobs in order to pursue music. MCing became a life survival tool that allowed him to express his experiences.

In 1998, Olmeca joined L.A. based crew, Acid Reign “paying dues” as an underground MC. He cyphered and battled at the famous Project Blowed and hip-hop shows throughout the city. Performing with legendary MCs they gained respect as credible rappers in the unforgiving underground scene. Olmeca later became vocalist and songwriter for the L.A. Latin soul & funk band, Slowrider. The band accompanied Ozomatli on various tours, shared the stage with the late Joe Strummer and Maldita Vecindad. This introduced him to the Latin Alternative scene. Olmeca eventually bridged these two worlds. He quickly became a strong voice as a provocative artist helping spawn a new music trend of inclusivity. “I didn’t see why we couldn’t sample Los Bukis, or rhyme on a traditional Latin American rhythm in 6/8…. For me it about celebrating our upbringing and owning our diverse experience…”

Olmeca left the U.S. and lived in the jungle for a year before becoming a solo artist in 2006. Semillas Rebeldes, an album written in the Chiapas Jungle responded to the times. With his edgy sound and proclamation, Olmeca quickly became a national act gracing stages from LA to Atlanta, Chicago and Houston. After a few mixtape songs and collaborations, Olmeca released the anticipated eclectic sophomore album, “Counter Culture.” Collaborating with DJ Pain (50 Cent, Schoolboy Q, Public Enemy), La Marisoul (Grammy nominated, Santa Cecilia) amongst others. The album received notice beyond the U.S. granting Olmeca the opportunity to travel to Vancouver, Honduras, and Ecuador.

Olmeca is a prolific writer and producer who deftly depicts his upbringing and gives social commentary with energy, charisma and intelligence. Reminiscent of Calle 13, Rage Against the Machine and Café Tacuba, Olmeca’s music takes its place amongst provocative musical expression.
Olmeca earns praises from the World Famous Wake Up Show (MTV Sway and Tech) a show that catapulted the careers of Eminem, Dilated Peoples, Jurassic 5, amongst others. He has garnished attention in the Latin Alternative market earning mentions by Al Borde Magazine and performing with Maldita Vecindad, Jenni Rivera & Ivy Queen. In addition, Olmeca’s efforts have given him a place amongst social justice dignitaries speaking and performing along side Dolores Huerta, Naomi Klein, Luis J. Rodriguez to name a few. In doing so, he has gained the respect of his peers in demanding underground scenes, as well as that of many well-known names in the mainstream music industry, academic circles and human rights advocates.

Olmeca’s next show will be at Los Globos on March 8th .