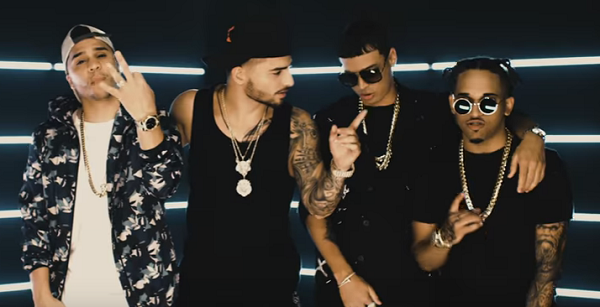 Trap is definitely trending in the mainstream rap scene, making its way to Latinoamérica. Trap music is identified by its mix of rap, hip-hop, and heavy use of electronica, popularized in the U.S. by rappers like Gucci Mane. Trap music got its start in the South; Atlanta, to be exact and its lyrical focus is the “trap” life, drug dealing, poverty, and violence, over electrifying and addicting beats that has everyone bobbing their heads.

While Latino rappers and rap en español are not new concepts, the trap music subgenre is growing in Latin America and being popularized in mainstream Latino music. We’ve rounded up some up and coming Latino trap music artists to listen to.

At 18-years-old, Bryant Myers from Puerto Rico, with his deep, throaty vocals, has lended his trap style to Maluma’s “Cuatro Babys.”

Bad Bunny is a staple in the Puerto Rico trap music scene.

Trap Capos Season 1, a compilation of Latino trap, features Noriel on almost every track. The album debuted at No. 1 on Latin Rhythm Albums.

From Colombia, Kevin Roldán is a blend of reggaeton y trap.

Latinx Podcasts Worth Listening: To Get Inspired, Laugh, Dance, and more…