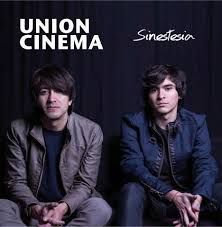 Los Angeles, CA – December , 2013.- The day has finally arrived for the release of “Sinestesia”, the long-awaited debut album of UNION CINEMA, the Peruvian group that consists of Antonio Jáuregui, former member of the famous band Libido, Toño Santiváñez and Alessandro Coluccelli. The record features 10 previously unreleased tracks and includes “A Ser Historia”, the first single recorded in 4 languages, and “Mi Obsesión Por Ella”, second single of the album.

Union Cinema’s debut album that was released in their home country on November 24 and reached double platinum record in just two weeks, has received excellent reviews as one of the country’s best records released this year.

The album was completely recorded in Lima, Peru, and mixed by Duane Baron, a prestigious producer known for his work with numerous important groups such as Social Distortion and Ozzy Osbourne. The masterization was done by Adam Ayan at the Gateway Mastering studio, a place well known for their work on excellent albums, among them the latest releases from Daft Punk, Coldplay and Radiohead, among others.

Sinestesia has been presented live internationally a few days ago via streaming by TERRA.COM, capturing the attention of multiple cities in Latin America and the United States, registering thousands of views. The English-language version, which is called READY FOR THE DAY, has been planned for 2014. A new live presentation via Terra.com will take place on Saturday, January 18, where more tracks from the SINESTESIA album will be featured, including a few versions in English.

UNION CINEMA, now with their full line-up as power trio, has planned a visit to Los Angeles and Mexico starting on January 20, 2014, with a few live shows of their debut album called Sinestesia.

They will be presenting a show on January 26th at Los Globos in Los Angeles for Musica Roots Magazine along side Los Rabanes . Event page link https://www.facebook.com/events/1383594285226393/

THE ALBUM REACHED THE DOUBLE PLATINUM RECORD IN JUST 2 WEEKS AND WAS PRESENTED LIVE A FEW DAYS AGO ON TERRA.COM WHERE IT REGISTERED THOUSANDS OF VIEWS THROUGHOUT LATIN AMERICA AND THE UNITED STATES

UNION CINEMA NOW FEATURES ITS COMPLETE LINE-UP AS A POWER TRIO AND ANNOUNCES THEIR VISIT TO THE UNITED STATES AND MEXICO.

The album is now available in all digital stores including iTunes