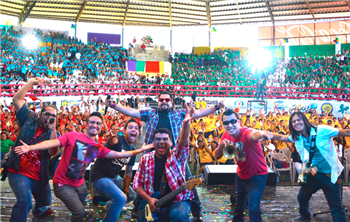 Friguey is the premier latin rock band to come out of Central America in recent years. No other band plays as many gigs (200+/year), no other band is featured in more marketing campaings for big brands (Corona, Coca Cola, Tigo Wireless), and no other band has played in as many countries and has the international proyection.
Today, Friguey has played in almost every country of Latin America, sharing stages and parties with legends like Cafe Tacuba, Kinky, Jaguares, Panda, Vicentico, Rabanes, and Zoe. This constant touring through the veins of Latin America has given the band it’s unique sound and shaped their mantra: life is a party to be lived out to the fullest!! Recent notable gigs include playing the H2O Music Festival in Los Angeles alongside Snoop Dogg, John Legend, Ozomatli, and Paulina Rubio.
The first single of the new record, “Cuando te Veo” is currently number one in radios in Central America as well as numerous Internet radio stations. CocaCola.Fm chose the band for its official launch in Latin America with a live cast that reached thousands across Central and South America.
The band is also an official Fender Artist.