The Belasco Theater, near Downtown Los Angeles, drew a crowd the night of, May 23rd, with the band Enjambre. Enjambre’s style of music seem to be taking over Latin dominated cities. They began their U.S. Spring Tour in LA and will continue until July 12th, where they will be performing at the Latin Alternative Music Conference and the BRIC Celebrate Brooklyn at Prospect Park, in Brooklyn, New York.

Enjambre pulls inspiration from Spanish singer Jeanette, Argentine singer Sandro De America, to the classic rock sounds of Led Zeppelin and The Beatles. Be on the look out for their newest album, which will be released very soon.

Our contributor Claudia Marmolejo sat down with Enjambre for an interview before their recent show in LA, check it out:

Enjambre, one of the most powerful bands in Latin American rock, recently released four remixes of their most recent single: Y La Esperanza. In this project, they worked alongside Bonnz (the drummer of Hello Seahorse!), the collective Push Button Heroes, Dave (vocalist of Simplifires) and their very own drummer Ángel Sánchez. Bonnz’s remix is the first to be released and available on all digital platforms. 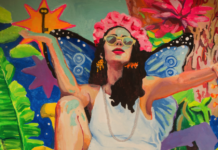