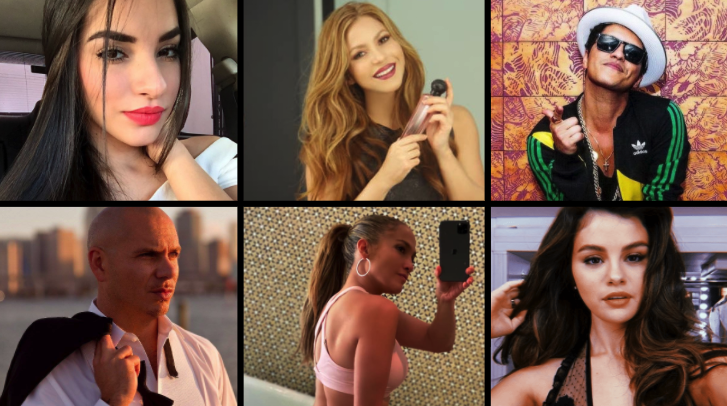 Facebook, YouTube, Twitter, Instagram, Snapchat, and now TikTok. While some of us struggling to keep up with the abundance of content flooding the airwaves (myself included, admittedly), many are thriving with the ever-changing technological landscape, otherwise known as social media. It’s become easier than ever to connect with friends and fans, and you better believe Latin music’s biggest stars are getting in on the action. It’s a social media world, and these are the top social media girls (and boys).

Note: With Snapchat’s less-transparent nature, we’ve forgone those numbers for the purpose of this list.

The third-generation Mexican-American has fully transcended from everyone’s favorite Disney star to an executive producer, with her name on the popular Netflix series 13 Reasons Why, and most recently, Living Undocumented, a docu-series following eight immigrant families as they face potential deportation. In the process, Selena has racked up a hefty 181 million Instagram followers, ranking her the 6th most followed account on the platform, and the 2nd most followed musician (beat only by Ariana Grande). She also takes the cake for most followed Latina on Twitter with 61 million followers.

This triple-threat Latina from the Bronx is a hit across all platforms, perhaps most impressively on TikTok (formerly called Musical.ly), the relatively new and Gen Z-dominated app. Our Puerto-Rican queen made waves on the short-form video platform with the #JLoSuperBowlChallenge, challenging her 10.5 million followers to post their own renditions of her Super Bowl Halftime Show dance. As for the more seasoned social media sites, Instagram and Twitter, Jenny boasts a following of 124 million and 45 million, respectively.

The singer-songwriter known for his R&B-infused pop tunes reigns as the most-followed Latino musician on the list at 55.5 million strong on Facebook, 43.1 million on Twitter, and 28 million on YouTube. The Puerto-Rican (born Peter Hernandez) has been quiet this quarantine, but we might be able to expect a comeback soon…

Despite lacking personal accounts for two of the five major platforms (Twitter and TikTok accounts operated under the handle @TeamDemi seem to share the burden for marketing purposes), this former Disney star still manages to clock in well over 100 million followers, putting her at a not-too-shabby 5th on the list. On a return from hiatus, Demi released a new single “I’m Ready”, and has remained outspoken on topics like LGBTQ+ rights and equality via her channels.

With a prolific career dating back to the early 90’s, the “King of Reggaeton” tops the YouTube list at just over 30 million, and is featured on fellow Puerto-Rican artist Luis Fonsi’s record-breaking crossover hit “Despacito”, which currently holds the title of most viewed video on YouTube with a whopping 6.84 billion views.

If you still haven’t gotten your fill, check out the top 5 for each platform below:

Who did we miss? Let us know in the comments!