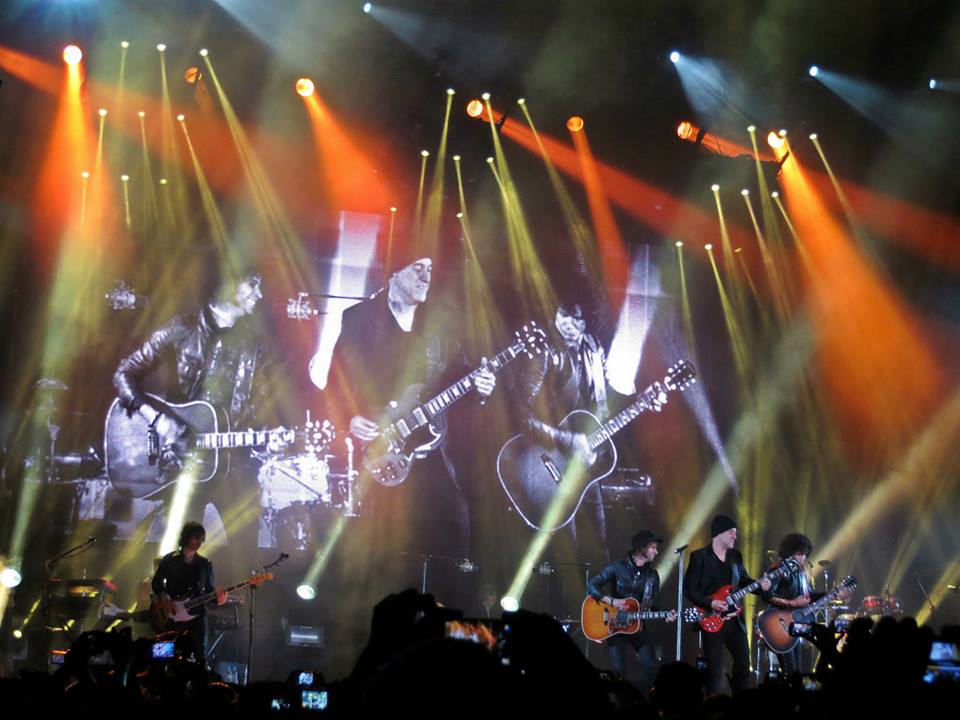 After not having played the city of Tijuana during the Licenciado Cantinas Tour in 2012, the fans from the border town finally got the chance to see their musical idol in their own turf and last Saturday, February 16th, at the Plaza Monumental Playas de Tijuana, Bunbury put on a unforgettable performance that left the thousands of fans at the bull ring aching for more.

From an early hour, the music faithful began to arrive and line up outside the venue. A large number of vehicles going into the bull ring parking lot had U.S. California plates, which only goes to show the popularity of Bunbury on both sides of the border.
As soon as the lights turned dark, a deafening roar came down from the crowd. At the back of the stage, a giant screen showed interplanetary images and then a UFO appeared flying around until it stopped right in the middle. As a bright light beam came down from the UFO, at the base of the beam, the figure of Enrique Bunbury appeared and the roar of the crowd became even louder. 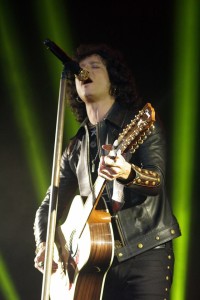 When Bunbury’s band, Los Santos Inocentes, played the opening notes of the first single of the new album, “Despierta”, Bunbury made his way to the front of the stage and took the crowd to the brink of delirium with his now classic physical movements and his powerful voice.
Bunbury and the band were in top form and like a well oiled machine they kept churning out passionate renditions of the new songs from the “Palosanto” album as well as updated versions of older songs and especially those that are now classics in Bunbury’s repertoire.

Along with playing 7 new songs, and after the opening number, “Mas Alto Que Nosotros Solo El Cielo”, “Los Inmortales” and “Hijo de Cortés”, among others, made the set list. The new songs were spread out though out the length of the show, including the encores, and in between, we heard classic Bunbury songs like “El Club De Los Imposibles”, “Contracorriente”, “El Extranjero” and “El Rescate” amongst many more.
Without a doubt some of the highest points of this memorable evening, were the revised version of the Heroes Del Silencio classic, “Deshacer El Mundo”, “Si” and “Lady Blue”, which the crowd sang at the top of their lungs.

For the two encores, Bunbury played a new song, “Prisioneros” followed by “Infinito” and after a short exit, Bunbury and Los Santos Inocentes came back to close out the show with riveting renditions of “Bújias Para El Dolor”, “Sacame De Aqui” and “El Viento A Favor”.
For California fans, Bunbury will be bringing his Palosanto tour in September, starting out in San Francisco on September 3rd, followed by Los Angeles on the 5th and San Diego on the 6th.