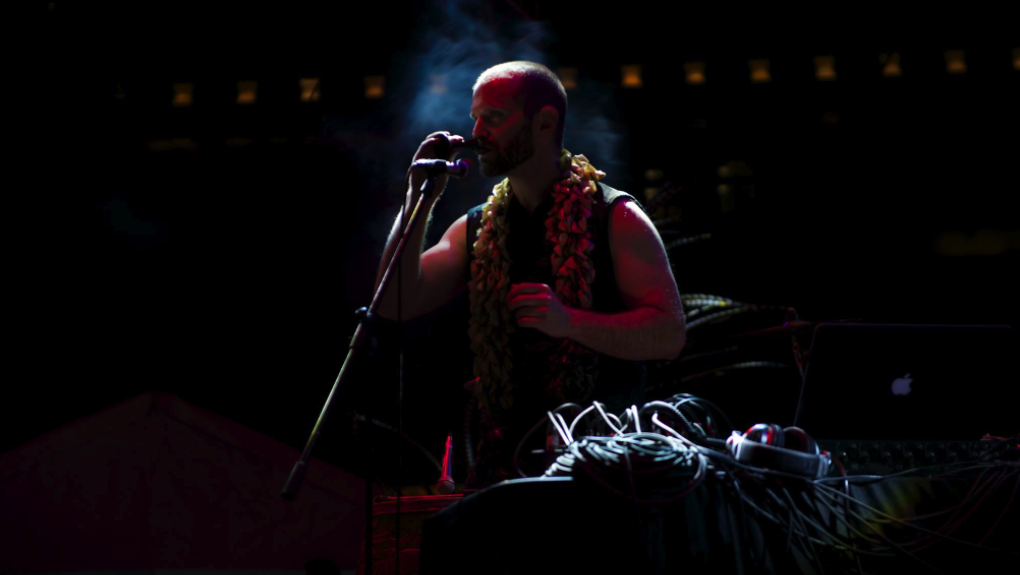 DJ and producer Alyosha Barreiro, along with band Nok Niuk, are the Mexican artists that make up Prehispánica Electrónica. They recently performed in Los Angeles, sharing their unique brand of music, which, as their name would suggest, fuses ancient prehispanic sounds with exciting electronic beats.

As part of the “2017: Year of Mexico in Los Angeles (MXLA 2017)” program, Barreiro and Nok Niuk offered an unforgettable, intensely moving multimedia concert in front of over 5000 spectators. This outdoor event was held at the Bell Gardens Veterans Park.
“It was truly an honor to be able to perform in such an important city, especially in times of such great political differences. It seems to me that it is time to unite and sympathize with our Northern brothers who are going through very difficult times,” said Barreiro. “It’s important to remind them where we came from and where we’re heading.”

Over the course of roughly one hour, Prehispánica Electrónica led the audience through a thrilling journey that included solemn ancestral Aztec rituals as well as a climactic scene featuring an explosion of energy, contemporary sounds, music generated by synthesizer, and enveloping atmospheric melodies coming from flutes and ancient instruments called ocarinas.  “Our goals were always clear: to reestablish our identity as proud Mexicans, to honor our ancestors, to forget—even if just for a moment— that there is a border created by political ideology, and, most importantly, to highlight that, in the end, our essence and our past unite us and give us our identity,” stated Barreiro.

The LA concert had a special musical guest, Karin Burnett, who came onstage around the midpoint of the show. She immediately captured the attention of the audience with a dramatic interpretation of the passage of souls through Mictlan, the underworld described in Aztec lore. Profoundly touching songs, as well as prayers recited in Nahuatl, bookended her appearance.  Burnett has had a very successful career thanks to a project called Afrodita, in which she and fellow musician Immanuel Miranda fuse cumbia, ballads, and electronica in order to create unexpectedly sensual tracks.

Visual artist Gustavo Cisneros was in charge of creating the dazzling multimedia world in which the Prehispánica Electrónica show took place.  It goes without saying that the artists love Mexico. On social media, at this time they express deep sorrow over the recent earthquake that took the lives of nearly 300 people at last count, and left many others homeless or destitute.

Barreiro, around the time of the show, mentioned there were plans for upcoming concerts in Mexico City—which is now astounding the world with its spirit of solidarity and collaboration in the aftermath of the earthquake—as well as in the Netherlands and Austria.

Find Prehispánica Electrónica on Facebook and watch an amazing Spanish-language video below: