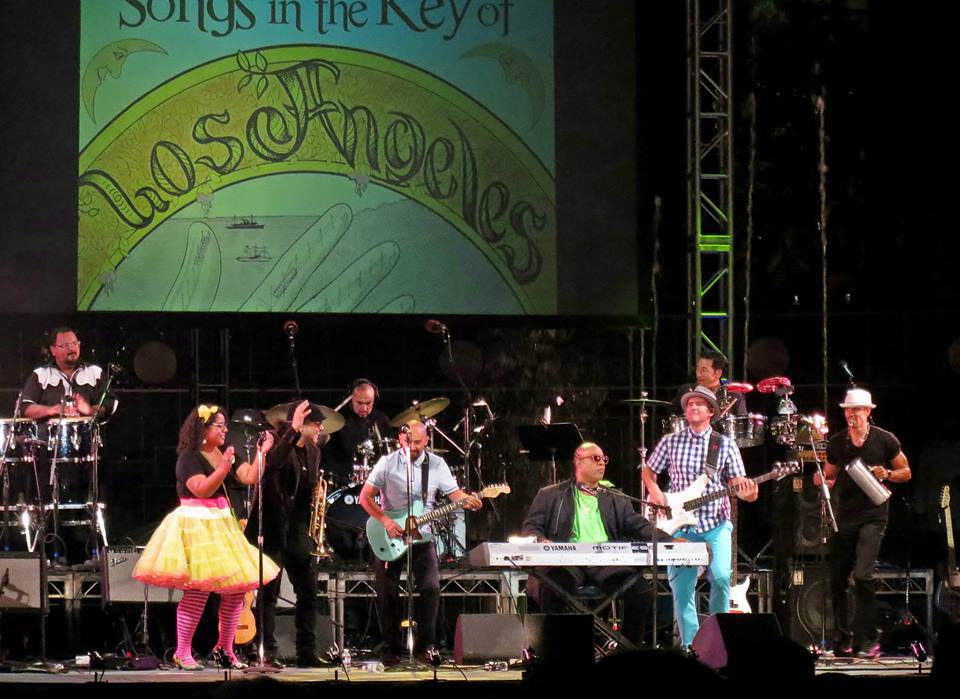 Songs In The Key of L.A
Last Friday night at Grand Performances at the California Plaza in Downtown L.A., Ozomatli and special friends gave a master class in the musical culture and history of our beloved Los Angeles.

Songs In The Key Of L.A. was a project started by USC professor and great supporter of Latin music and especially “Rock en Español” Josh Kun. Professor Kun recently released a book by the same name in which he goes into details of the musical history of Los Angeles.

Ozomatli showed their versatility as they not only played their biggest hits, but they masterfully performed the 1908 jazz piece “I Love You California”; or their version of Sublime’s “April 29, 1992” and also backing up rock & roll icon, Jackson Browne on his take on the classic L.A. story of “Ramona” and his own personal tribute to the city of angels, “Culver Moon”.

Ceci Bastida, the Tijuana No singer and keyboardist, backed by Ozomatli, sang “El Quelele” a 1923 Mexican ballad and the punk classic, “Los Angeles,” by one of the original L.A. punk bands, X.

La Santa Cecilia, took “Las Chiapanecas” a tune that may sound familiar to many as it is often played as an instrumental piece for folkloric dances, but La Santa Cecilia as they their research for the song, found the originaly lyric sheets which were in both English and Spanish and gave a rousing updated rendition that had people up and dancing.
Without a doubt the highlight of the evening was when Josh Kun said, “We wanted to do the Stevie Wonder song ‘Land of La La’, but we thought, who can we get to do it? So we called Stevie Wonder up and he said: “I will do it” and Stevie Wonder walked on stage to a standing ovation. Stevie started off with a solo version of his song “Overjoyed,” then went into ‘Land of La La’ with just his keyboard, but halfway through, the members of Ozomatli slowly walked on stage and picked up their instruments and joined in taking the song to another level that had everyone off their seats dancing.