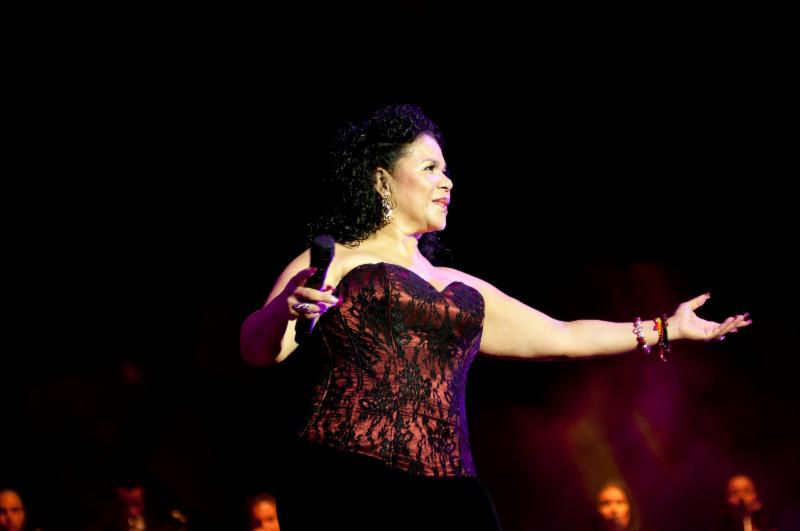 Los Angeles, CA – September 18 2013 . – The legendary Eva Ayllón, an extraordinary Afro-Peruvian singer of unmistakable and powerful voice, dominating stage presence and of international recognition, announced her concert in Los Angeles, California this coming October 19 at the legendary Royce Hall on the campus of the University of California Los Angeles, UCLA.

Eva Ayllón, with six Latin Grammy nominations during her career, is a national star in her native Peru, many influential critics agree that since the 90s, Eva became the most popular singer of international acclaim living in her country. Rooted in creole and Afro-Peruvian music, Eva Ayllón is known as “The Queen of Landó,” a soulful genre of Afroperuvian song and dance. Eva includes in her repertoire a diverse range of genres from Latin America starting with boleros and tango to salsa and Afro-Peruvian festejo.

Defined by The LA Times as “the Tina Turner of Peru,” Eva Ayllón began her career in the late 80s and now enjoys a robust discography of more than twenty albums, six Latin Grammy nominations and other awards of significant global prestige. Her latest album “Eva Ayllón, 40 Years in Love with Peru,” is a compilation of her greatest hits including songs from other musical styles that she has performed throughout her career.

For over 40 years, Eva Ayllón has been selling out theaters not only in her native Peru, where she can fill stadiums with a capacity of over 30,000 people, but also in other countries, including the United States. Her presentation in Los Angeles, is part of her fall tour with performances in prestigious concert-halls including Carnegie Hall in New York where Eva will share the joy of Afro-Peruvian music with American audiences.

For more info and tickets http://www.evaayllon.net/?utm_source=EVA+AYLLON&utm_campaign=de+la+tierra&utm_medium=email