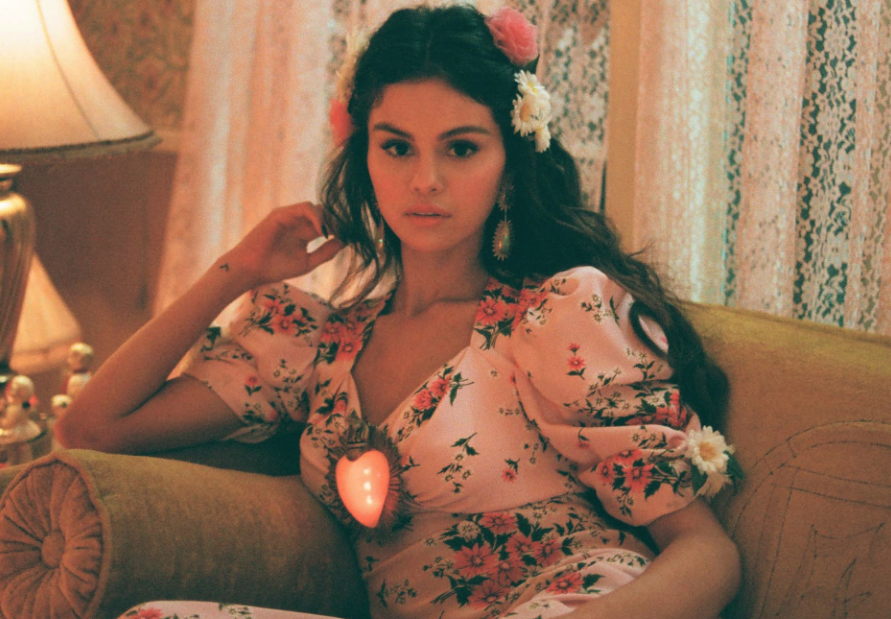 We have no time for broken hearts in 2021. That’s what Selena made us realize with her newest release. “De Una Vez” is her new single, and it’s entirely in Spanish.

We haven’t heard Selena sing in Spanish for over a decade. “Un año sin Lluvia” and “Dices” were the only songs she has ever sung in Spanish, and those were versions of before released singles A Year without Rain and Who Says.

Even though ten years had to pass to listen to Selena in Spanish again, she had participated in two Latin songs in recent years. 2018’s hit Taki Taki, where she shared with Ozuna, DJ Snake, and Cardi B, and I Can’t Get Enough with J balvin, Tainy, and Benny Blanco.

You could see her sitting on a couch, with flowers on her head and shiny glass heart on her chest, a very romantic piece of art if you ask us.

People usually forget that Selena has Mexican roots and has always been very outspoken about the Latin community in the United States. She also has an immense Latin fan base who identify with her.

She shared that this is a project in which she’s been thinking about for years, and this seems to be the year where she finally brings it to life.

Just a few hours after the surprise, she released the song and the music video. The song is an anthem for breakouts, for that moment where you give up on the suffering and get strength back in your heart.

Blossoming and rebirth are the words that come to mind when watching the music video. You can see her at one point surrounded by nature that’s growing back to life and blossoming flowers, specifically at the moment when she sings “de una muerte como tú se revive” (You can come back to life from a death like you.)

The song has a soft reggaeton rhythm that makes it super catchy. Even if you don’t speak the language, you can find yourself singing along the beat. It’s a pretty chill song that gives an empowering message.

“I don’t have you, I have me” is probably our favorite part of the song. A reminder that, even when we have our hearts broken, sometimes it’s best to have ourselves rather than being with someone that’s making us suffer.

If you’ve listened to the song, tell us in the comments what you thought about it. Do you think this the first step to Selena’s first album entirely in Spanish?

De La Ghetto Brings a Unique Flow into the Intimate and...

Leiva Premiered the Video for His New Single off the Album...